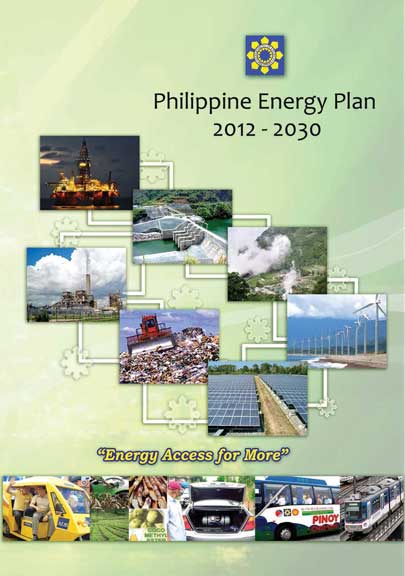 I. OVERVIEW AND EXECUTIVE SUMMARY

Guided by the overall vision of providing “Energy Access for More,” the 2012-2030 Philippine Energy Plan (PEP) seeks to mainstream access of the larger populace to reliable and affordable energy services to fuel, most importantly, local productivity and countryside development. The energy sector, mindful of its role in promoting better quality of life for the Filipino people, will ensure the delivery of secure, sustainable, sufficient, affordable and environment-friendly energy to all economic sectors. In pursuit of this goal, the government will mobilize private sector participation and involvement of other stakeholders to make power of choice a reality. 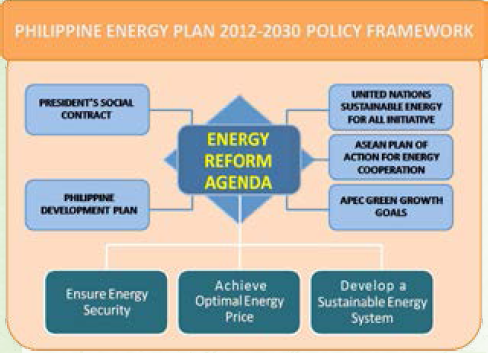 The ERA has outlined the following major pillars as its overall guidepost and direction: (a) Ensure energy security through the development of indigenous energy such as renewable energy and hydrocarbon fuels (oil, gas, and coal); (b) Achieve optimal energy pricing in electricity and oil; and, (c) Develop a sustainable energy system through the formulation and update of national plans and programs on energy development, which are consistent with the country’s economic development plans.

The 2012-2030 PEP is crafted with due consideration and premium on the economic parameters sourced from the National Economic and Development Authority (NEDA), Development Budget Coordination Committee (DBCC), National Statistics Office (NSO) and international references on energy such as the World Energy Outlook of the International Energy Agency (IEA). For the medium-term, the 2012-2030 PEP is basically anchored on the policy framework set in place with the formulation of the Energy Reform Agenda (ERA). The ERA is consistent with national development directives such as the President’s Social Contract and the 2011-2016 Philippine Development Plan; and, responsive to long-term (beyond 2016) global policy frameworks on energy such as the UN Sustainable Energy for All Initiative and the APEC Green Growth Goals.

We at the Department of Energy (DOE) have committed to pursue national development through the two-fold agenda of attaining energy independence and implementing power market reforms, which we have affirmed in our Philippine Energy Plan (PEP).